Everything You Need to Know About Cast Iron

Hey there, it’s Gubba and welcome back to the Gubba podcast! This podcast addresses topics like homesteading, prepping, food storage, and everything in between. Today is definitely an in between topic because I will be talking about cast iron cookware. How to use it, how to cook with it, how to clean it, and how to maintain it.

A few years ago, I purchased a 12 inch cast iron pan and it has become a staple in my kitchen. Before purchasing my cast iron, though, I was a little daunted at how to care and maintain a cast iron pan.

You hear and read a lot about “seasoning” a cast iron pan, but that doesn’t actually mean you go to your spice cabinet and start adding some oregano to the pan.

Check out my weekly episode to join the conversation.

What is seasoning cast iron?

Seasoning means to bake oil into the cast iron. Doing this gives the pan that finished look, helps prevent rusting, makes for the non-stick surface that everyone vies for with cast iron.

Generally, if a pan comes “pre-seasoned” it was seasoned with a vegetable type soy-based oil, and I personally wouldn’t want to have that intermingling with my food, so I would season the pan myself after purchasing.

What can I use to season a cast iron pan?

It is recommended to use vegetable oil, shortening, or canola oil due to the inexpensiveness and availability, but I personally wouldn’t use any of these oils.

I am refraining from seed oils and am opting for healthier fats, and there are other options you can use to season your pans.

Traditionally, animal fats like lard used to be used to season cast iron back in the day.

Nowadays, lard isn’t readily available and if the cast iron isn’t used enough, the animal fats can break down and go rancid. But that isn’t a problem if you are using your cast iron all of the time.

If you don’t have access to lard, I would suggest using avocado oil. It has a high smoke point of 520F, is flavor neutral so you won’t have any added flavors to what you’re cooking, and you can easily find it in stores.

Another healthy alternative is coconut oil. Coconut oil is not flavor neutral and can potentially add a coconutty flavor to what you cook and that’s why I don’t use it—because I hate the taste of coconut.

What oils can I use to season cast iron?

Use the oil that works for you and your household. I initially used safflower oil to season my pan a few years ago, now I use a mix of avocado oil and animal fats to season my pan.

How do you season a cast iron pan?

So say you just purchased your cast iron and you have decided what kind of oil you want to use, now you will season your pan. You will want to rub a layer of the oil on your cast iron then heat it to the smoke point of the oil.

It is important to know the smoke point so then you know what to heat your pan to. Once the smoke point is hit, this is when the chemical bonding process takes place between the cast iron and the oil.

I did this by rubbing oil on my cast iron then heating it upside down in the oven with a cookie sheet on the shelf below to catch any drippings.

I repeated this process about 3 times, each time hitting the smoke point of the oil in the oven to essentially create a layer of seasoning on my cast iron.

Say you make some eggs and cook them in butter, that butter is going to season the pan and work on building a non-stick surface.

I personally wouldn’t start cooking on anything freshly bought from the store because I like to clean items after purchasing and seasoning through the high heat method is a great way to sterilize and create a clean cooking surface.

How do I clean cast iron?

Cleaning cast iron is simple and, like anything, has a plethora of opinions once you start researching how to do it online. After you have cooked with your cast iron, you will want to clean it.

I would suggest only using soap if you have tough, sticky foods to get off of your cast iron. Otherwise, if it is an easy clean, I wouldn’t use soap.

I use a plastic scrubber brush that has a scraper on the back of it to clean my cast iron. I also use coarse sea salt for cleaning my cast iron.

Can I use soap to clean my cast iron?

Yes, you can! For example, if I just cooked in my cast iron and there is some food residue stuck on the pan, I will take it over to the sink and pour some water into it.

I will then pour course sea salt into the pan and wipe it around with my brush because the abrasiveness from the sea salt will help scrape the food residue out of the pan.

If it is a really sticky situation, then I will use a little bit of soap and water and then gently brush and scrape with my plastic brush scrubber.

This way of cleaning has kept my cast iron clean and I have no problems with it. The method of using sea salt as a coarse cleaner is great if you plan to camp with your cast iron and don’t have access to water because the abrasiveness from the salt should be able to clean up most messes.

After you have washed your cast iron, you will want to get rid of any remaining moisture on the pan. Do this by placing your pan back on the stove top and heating it up.

Once all of the moisture is gone, you will want to rub a light layer of oil over the surface of the pan. This helps it to not rust and just adds to that non-stick layer.

I wouldn’t suggest using paper towels on your cast iron to either rub oil on or off or for cleaning because little tidbits of paper towel will break off and then you will have to pick them out of the cast iron.

I’ve done it before, so I can tell you that it is super annoying. I use a fiber cloth that is only for my cast iron.

How do you maintain a cast iron pan?

To maintain your cast iron, basically just clean it properly and don’t soak it in water. Also, don’t cook acidic foods in your cast iron because it can peel away the seasoning or ware it down.

I once had a roommate who had a prized cast iron pan and while she was away for the weekend, another roommate decided to use the pan. After not using it properly and leaving a ton of food stuck on it, the roommate decided it was a good idea to soak the pan in water over night to get rid of the stuck-on food.

The other roommate came home to find their beloved grandparents cast iron that had survived generations to be sunk like the titanic in our apartment’s kitchen sink.

There were a lot of angry exchanges that day, and my roommate took the cast iron home to be revived. I’m unsure if it ever made a full recovery, but just use your pan properly and it will maintain itself.

What are the benefits of cast iron?

I love cooking in cast iron for a number of reasons. It cooks evenly because the entire pan heats up and I love that I can go from cooking something on the stove top in the cast iron then I can throw it in the oven and bake whatever is in it.

The versatility comes in handy and I can also take my cast iron pan camping and not have to worry ruining it. I’ve taken it camping a few times and made some bacon and eggs over the fire and it was absolutely delicious.

I love that cast iron can truly last for generations if taken properly care of and not used by destructive roommates. Cast iron is all my grandma used to cook in and I wish I had inherited her pans, but I can build up my cast iron to one day be inherited.

I don’t want anything to do with it. Cast iron is also inexpensive. I think I got my 12 inch pan for about $30. I will have this pan for forever, so it was well worth the money.

What are the negatives of cast iron?

The only downsides to cast iron I would say is that the cookware is heavy. If you have every played PUBG, then you know that it can be used as a weapon in that game.

It can be used as a weapon IRL, so maybe its heaviness isn’t so much of a downside. I genuinely can’t think of any other downsides when thinking of my use of cast iron. It is susceptible to rust but if you are using it properly and maintaining it, then you don’t have to worry about it rusting.

I guess the clean up can be a hassle since you can’t just throw it into the dishwasher. Besides those few things, cast iron is an absolute must for cookware.

I hope that you have a better understanding of how to use cast iron after listening to this podcast. I remember when I was venturing into cast iron cookware and no one had really explained seasoning in the podcasts I listened to.

They all discussed the benefits of cast iron and how it needs to be properly seasoned but never ventured into the how to of seasoning and proper care for cast iron.

This resulted in me over-thinking this simple cookware and being nervous to get one for a while. I promise you they are easy, versatile, and a good option when it comes to prepping.

I hope you have a wonderful day and I appreciate you tuning into this episode!

Don’t do anything a Gubba wouldn’t do! 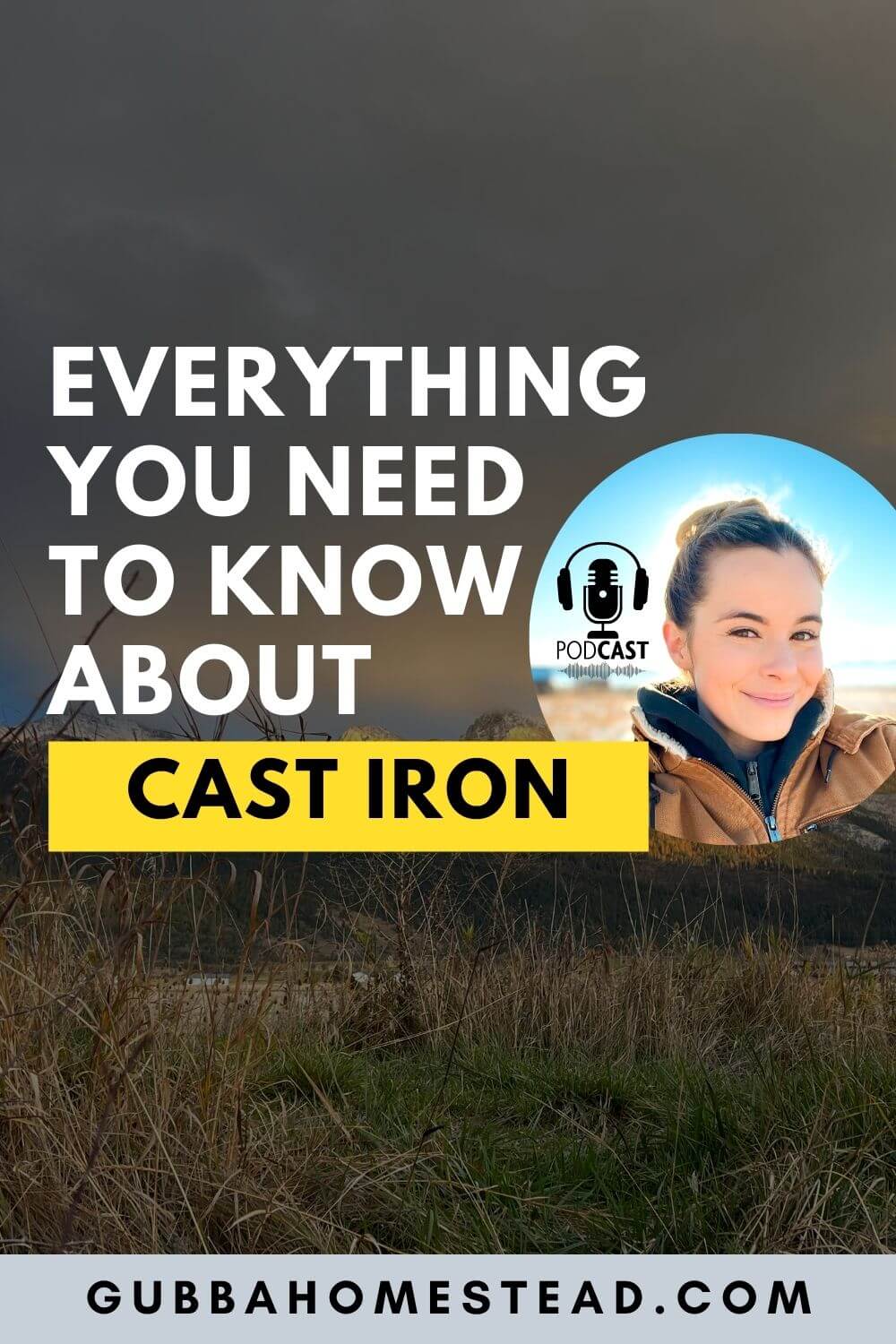 How To Prepare For Food Shortages